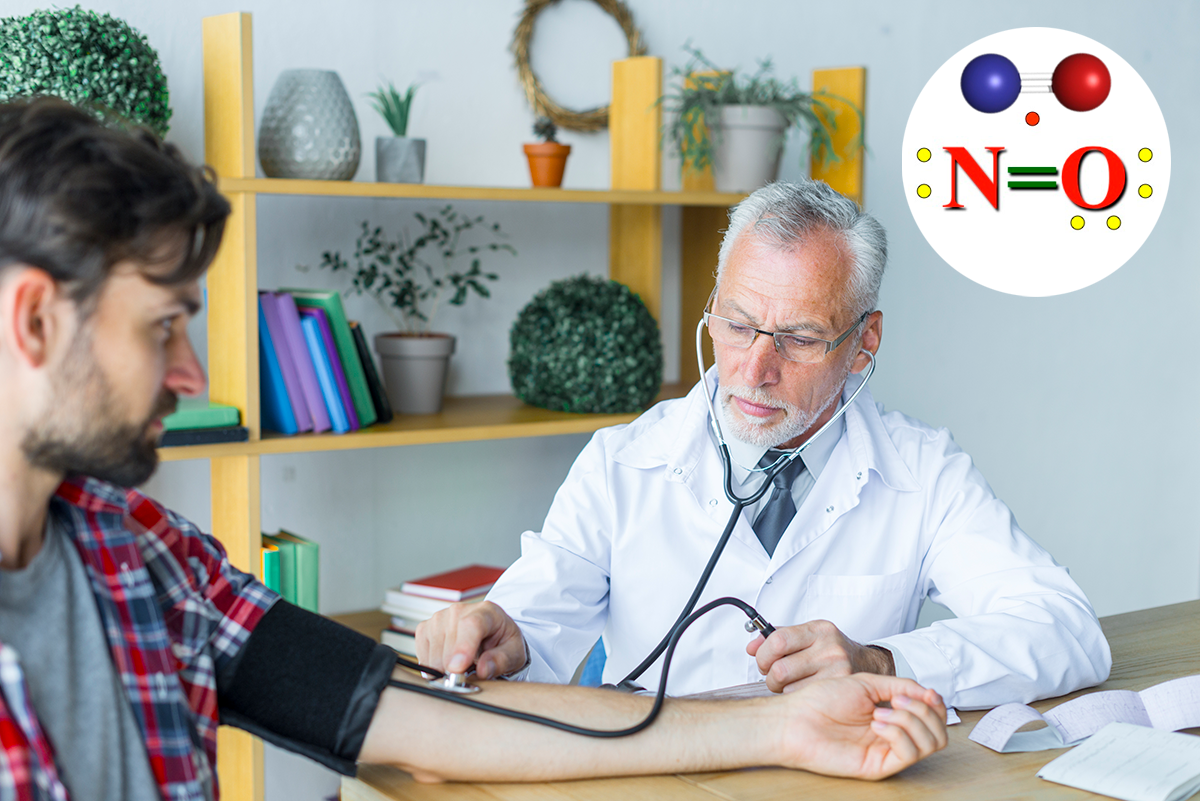 Nitric Oxide, also known as NO, is a natural signaling molecule produced in the arteries, brain and many other organs in the body. In its natural state, NO is a very unstable gaseous molecule that lasts for only a second or less after being produced inside cells. But this is long enough for NO to elicit its effects in the body. NO is produced from L-arginine, one of 23 amino acids present in all proteins. Another amino acid from protein, L-citrulline, is first converted to L-arginine, which is then converted to NO. Therefore, both L-arginine and L-citrulline are sources of NO, and eating healthy protein will increase NO production. The first discovered effect of NO in the body was vasodilation, which means that NO allows more blood to flow through the arteries and veins, bringing about improved blood flow to all organs, especially the brain and skeletal muscles. Vasodilation also helps to maintain normal blood pressure. In addition, an important function of NO is to act as an anti-inflammatory molecule to help prevent formation of unwanted blood clots in arteries, thereby reducing the incidence of stroke and heart attack.

Nitric Oxide also provides health benefits outside the cardiovascular system. For example, NO produced in the brain is essential for learning, memory, and information recall. Dementia, including Alzheimer’s disease, is associated with reduced levels of NO in the brain. NO also maintains normal blood flow in the brain and works to prevent formation of unwanted blood clots in the brain, which can cause stroke. It’s interesting to note that the brain makes more NO than does any other organ in the body but scientists still do not understand exactly why. Therefore, there are likely other beneficial actions of NO in the brain. NO acts as an anti-inflammatory molecule not only in our arteries and brain but also in our joints and in our digestive system. Anti-inflammatory effects are essential to prevent excessive swelling and pain in many organs of the body.

In the skin, NO works to maintain normal blood flow and to protect the skin against the dangerous UV radiation from the sun. For example, when the suns rays hit the skin, more NO is produced, which triggers the darkening of the skin (melanin pigment dispersion) and affords protection against the UV light. Did you know that NO is the principal mediator of erectile function in men and women? In normal healthy people sexual arousal triggers NO production, which in turn stimulates erectile function. ViagraR and related drugs for treating erectile dysfunction in men work by markedly improving the action of Nitric Oxide to promote blood flow into erectile tissue.

As you can see, Nitric Oxide is quite a unique signaling molecule that is essential for the proper function of nearly all organs in our body. To top it off, NO is often referred to as the “magic anti-aging molecule”. As we age, our NO levels steadily decline. NO levels are highest in the developing fetus and remain high through the first 10 or 15 years of life, after which time NO steadily declines with the aging process. Along with the aging process and declining NO levels comes increased risk for many disorders and diseases. Such risks are further heightened by unhealthy lifestyle such as poor nutrition and lack of regular physical activity.

Look for future posts as we explore more about this miracle molecule.