The History of the Discovery of Nitric Oxide 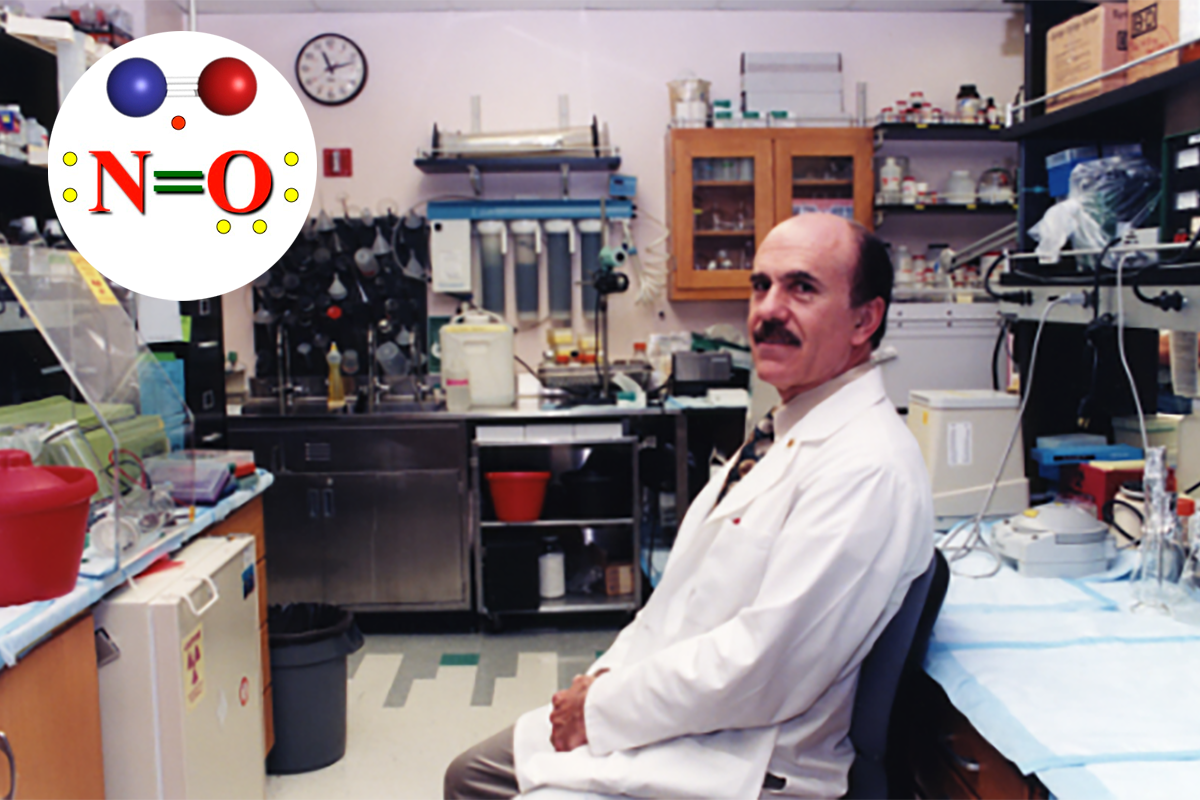 Although I am Professor Emeritus at UCLA, I continue to be involved in many academic endeavors. One, which I am particularly proud of, is editing the third edition of my book: Nitric Oxide Biology and Physiology. As I began putting together the introduction, I thought you might enjoy learning more about the history of the discovery of Nitric Oxide!

Nitric oxide (NO) is now well appreciated to be one of the most universal signaling molecules in the mammalian species. This concept was unheard of until about thirty years ago, when NO was first discovered to be present and produced in mammalian cells. Any rational scientist likely never considered the notion that nitric oxide, a chemically unstable and reactive free radical gas, could even exist in mammalian tissue. The reason for this is the basic chemistry of NO. For example, let us consider that NO is a highly lipophilic molecule that permeates all biologic membrane barriers with ease. It would have been impossible to conceive of how NO could be stored in cellular organelles, as were nearly all other known signaling molecules at the time? NO is a reactive free radical with a very short half-life in the biological milieu. Accordingly, how long could NO remain active even if it could somehow be stored? Considering these chemical facts, why would anyone consider for a moment that NO could easily function as a ubiquitous and widespread signaling molecule in mammals? It appears that no one had made this consideration until 1986, when NO was discovered to be masquerading in arteries as the long sought after endothelium-derived relaxing factor (EDRF).

By 1989 both the biosynthesis and mechanism of action of NO were elucidated. It became clear that NO is a signaling molecule produced enzymatically from L-arginine and then immediately activates cytosolic guanylate cyclase by heme-dependent mechanisms to elevate cyclic GMP. In arteries and veins, cyclic GMP is the second messenger expressing the vasorelaxant effect of NO. Following our discovery of endogenous NO, I recall revisiting the chemical properties of NO and addressing each of the reasons we originally believed that NO could not possibly exist as a signaling molecule. NO is a gaseous molecule in its native state but is fairly soluble in aqueous medium, where it functions as a soluble molecule. The lipophilic nature of NO is not an issue regarding organelle storage because NO rapidly interacts with its guanylate cyclase receptor upon biosynthesis. Rather, the lipophilic properties of NO enable NO to readily diffuse across cell membrane barriers to reach the intracellular guanylate cyclase target. Therefore, the lipophilic properties of NO make it an excellent signaling molecule. What about the short half-life of NO? Actually, whereas high concentrations of NO (mM range) react with oxygen very rapidly by 2nd order kinetics, biologically low concentrations of NO (nM range) react much more slowly. Therefore, endogenous NO has sufficient time to elicit its physiological effects. Moreover, the greater stability of nM concentrations of NO in oxygenated aqueous medium enabled the identification of EDRF as NO. Regarding the reactivity of NO with other species, NO reacts with the heme prosthetic group of cytosolic guanylate cyclase to bring about a 400-fold enzyme activation. NO interacts chemically with sulfur species at catalytic sites (ornithine decarboxylase) and other sites of proteins to modify their function physiologically. The ultra rapid reaction between NO and superoxide anion serves, among other things, to terminate the biologic action of NO. Therefore, the basic chemical properties of NO are highly suited to enable NO to function as a widespread signaling molecule.

Prior to 1986, there was no published evidence or accountable scientific discussion that NO could serve as an endogenous molecule in mammals. However, ten years before that, Ferid Murad and colleagues showed that laboratory generated or commercially available NO could activate cytosolic guanylate cyclase and elevate tissue levels of cyclic GMP. This was the beginning of the nitric oxide field in the biological sciences. Shortly thereafter, a series of nitrovasodilators (nitroprusside, nitroglycerin, other organic nitrate and nitrite esters) were found to stimulate tissue cyclic GMP production. Based on these observations, we suspected that NO was the active vasorelaxant species in all nitrovasodilators and reported for the first time that NO gas is a vascular smooth muscle relaxant. This was followed by our report that nitroglycerin acts as a vasodilator by first being metabolized in vascular smooth muscle cells to NO, which represents the active vasorelaxant species of all organic nitrate and nitrite esters used clinically as vasodilators. In ascertaining how nitroglycerin yields NO, we uncovered the role of S-nitrosothiols and that such species are excellent NO donor molecules. We pioneered the use of S-nitroso-N-acetylpenicillamine (SNAP) as a stable crystalline NO donor agent. In an independent study, we found that NO is a potent inhibitor of human platelet aggregation working by activating plate guanylate cyclase and elevating platelet cyclic GMP. By 1980, the two known prominent pharmacological properties of NO were vascular and nonvascular smooth muscle relaxation and inhibition of platelet aggregation. Then came a seemingly unrelated but provocative discovery by Robert Furchgott and colleagues that acetylcholine required the presence of arterial endothelial cells in order to relax the underlying smooth muscle cells. In an elegant series of truly classical pharmacological experiments, acetylcholine was demonstrated to somehow interact with the vascular endothelium to generate a chemically unstable species that subsequently interacted with the nearby smooth muscle cells to elicit relaxation. Not knowing what this relaxant species was at the time, it was named “endothelium-derived relaxing factor” or EDRF.

Having studied nitric oxide in the laboratory for many years, we became quite familiar with its chemical and pharmacological properties. When attempting to isolate, stabilize and identify EDRF, we became familiar also with the properties of EDRF. Suddenly, at one of our laboratory group meetings, we recognized that EDRF and NO shared so many identical properties. Despite all of the chemical reasons why we and others failed to consider the possibility that NO could exist in mammals, I decided to “think outside the box” for a change. We designed a series of chemical, biochemical and pharmacological experiments to detect and quantify NO and, against all odds, demonstrated in 1986 that EDRF is nitric oxide. This was the first demonstration that NO can and does exist in mammalian cells.